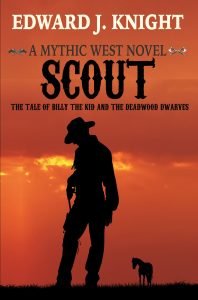 Eight years after the Jotunheim giants destroyed the Confederacy and most of the Union, the Army of the West stopped their last advance into what was left of the United States. Now the Army polices the borders while rebuilding its strength.

Billy McCarty hates army life. He loathes the daily regiments and rules. Strange sightings in the Black Hills offer him the chance to leave it all behind and lead his own small scout team to investigate.

But Billy’s never led a team before. As they head into the wilderness, where only the rules of survival matter, his every decision could mean serious injury or death.

For him or his friends.

In the Mythic West, where gunslingers battle monsters of myth, Scout continues the epic adventures of the hero, Billy the Kid.